While attempting to seize Hollywood fame in the 1930s, this pinup beauty tragically died before her dreams were ever realized. The Graveyard was moved but her crypt was overlooked and it remained, only to be paved over by a Drive-In in the 1949's. The potent back room concession stand garbage sludge concoction of Sugar, Rat-Poison, Trans Fats, and a smidgen of good old fashioned teenage black magic dabbling dripped down into the crypt and reanimated the oozy beauty to continue her undead rampage... Of entertainment stardom!

The Drive-In closed, the pavement cracked, the crypt opened, and what emerged was a ghoul of the finest quality. Atlanta's latest up and coming horror darling is not just your garden variety zombie pinup. She's well put together; from the retro red sunglasses atop her ghost white Bettie Page cut hair, to her stitched green legs stretching up into her black dress like two rotten daisy stems. A living dead homage to all the late and greats of classic pinup royalty. Not being alive anymore doesn't appear to be stopping this macabre madame from having a good time as she sweeps across the room chatting with her fellow monsters, taking photos with the curious living, and making friends with the myriad of “killer” costumed guests; a true ambassador of all things that go bump in the night. 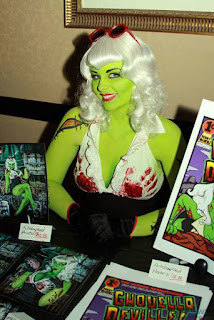 This cartoon come to life is Ghouella Deville, the self described 'Pinup of Putrescence' that has come to turn the world of midnight matinees on its head. Aside from her stunning images of kitschy horror pinup, Miss Deville owes much of her fame as a host of local Atlanta nightlife and events including the cult favorite Monstrosity Championship Wrestling. Sharpening her nails against their mastery of dark humor, Ghouella came out a prim and polished green gem ready to scramble out into her own brand of sexy and scary delights in the realm of horror. Her online show, The Ghouella Deville Show, streams for FREE on Vimeo, Youtube, and right here on GhouellaDeville.com!

Donate to the Show!

All donations go towards fueling new shows and free entertainment content. You get a big gooey green THANK YOU from Ghouella!